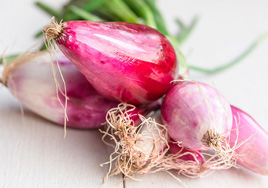 The red onion is the variety cultivated between Nicotera (Vibo Valentia) and Campora San Giovanni (Amantea - Cosenza) long the thyrrenian coast; it is farmed mainly in the area between Briatico and Capo Vaticano.

The red onion has been farmed since over two thousand years; being imported by Phoenicians it is today an important touristic product, with a strong impact on the economic growth of the area. They say the red onion owes its sweet taste to the stable microclimate throughout the year – as the farming areas are very close to the sea -, and to the loamy texture of the soil.

The taste is characterized particularly by a percentage of sugars, such as glucose, fructose and sucrose. It has a relevant impact on a balanced diet with its energy value of 20 calories in a 100g amount.

The bulb holds many beneficial effects, such as an action against sclerosis good for the heart and arteries, and as lowering the risk of heart attack.

One of its main effects is being a natural tranquiliser as it facilitate sleep.