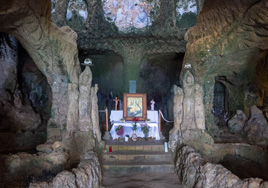 History and legend make Piedigrotta a one of a kind place to visit.
Since the seventeenth century, sailors have been telling of a sailing ship coming from Naples that sunk not too far from the Calabrian coast during a violent storm.
All the sailors on board gathered in the captain’s cabin to pray in front of the portrait of the Lady of Piedigrotta, vowing to raise a temple to her in case they would escape the wrath of the storm.

All of them managed to swim to safety; also, the same painting of the Lady and the Ship’s bell (1632) were washed ashore along with the crew.

The sailor carved a small shrine in the rock, where they finally placed the sacred painting. There were many other storms taking place in the area, and although the painting was taken away from the strength of the wave that entered the temple, they could always find it in the same place where it washed the first time after the sailing ship had sunk.

Around 1880 Angelo Barone, a local artist who run a small stationery shop in the town centre, decided to dedicate his life to that sacred place; everyday he would walk to the cave, which he enlarged using a pickaxe; plus, he filled the Church with statues of the Jesus and the Saints.

Angelo Barone died on May 19, 1917; his son Alfonso took his place, dedicating 40 years of his life to the temple making it as beautiful as it is today. He added more groups of statues, low reliefs and nave frescos. No one took his place after his death.
Sadly, at the beginning of the ‘60s the Church was target of vandals. A boy (perhaps two of them) entered the place with a bat and damaged several statues! Luckily, a relative of Angelo and Alfonso Barone, Giorgio, decided to come back from Canada – where he had moved and had begun a renowned sculptor – and try to restore the work of his uncles. He worked without interruption for several months and completed his work on 1968; the following year it received an official acknowledgement when both the Mayor a council member thanked Giorgio for his work.